In the vast expanse of Lau’s pristine seas is an uninhabited island called Vuaqava.

However, what most people don’t know is that its interior basin is occupied by what could be Fiji’s largest lake.

Known as the Vuaqava lake, its location can be mind-blowing to many.

Last week I was overwhelmed to have been allowed to travel with some ocean experts and those behind the Lau Seascape Initiative.

Our first stop was Naikeleyaga on the island of Kabara, where we were greeted by friendly island bula smiles and fresh green coconuts to quench our thirst after a 10-minute boat ride away from the Fiji Princess Boat which was anchored out at sea.

While at Naikeleyaga and after the normal daily routine was done, stories of the famous lake began to spread like wildfire.

Being the newbie on the trip, I wouldn’t hesitate to ask about the whereabouts of the lake.

I knew something was appealing about it.

While wandering along the white sandy beach under the scorching heat I was greeted by some villagers who said they were going to Vuaqava.

I knew this was the opportune time to hitch a ride with them and check the lake out myself.

Thanks to Apisai Bogiva from Conservation International I was able to accompany the group to the island.

Without thinking of what awaited me, I jumped into a fibreglass boat with my uniform and pocket sulu (something you wouldn’t want to wear if you have to travel to Vuaqava).

It takes almost 30 minutes to travel across to the island from Naikeleyaga.

The island is said to have been uninhabited since its owners suffered a cholera outbreak in the 1860s.

According to village elders back in those days, the sick were dragged into caves and left to die.

Villagers who were well moved to nearby Kabara Island.

However, their descendants still returned to fish.

To visit the lake, I relied on the guidance of a member of the mataqali Naivotavota of Naikeleyaga.

An hour-long hike through the slushy green forest and jungle brought us to the island’s large saltwater lake and its skeleton-riddled caves.

According to a senior village elder, Peni Dautu, the lake has a very interesting myth behind it.

He said a heated exchange between the chiefs of Kabara and Oneata led to the establishment of the island.

Mr Dautu said one day, a chief from Oneata visited Kabara and wanted to take a gift he found on the island back to his home.

“He came and heard mosquitoes buzzing. That’s when he asked our chief to take some of the insects,” Mr Dautu said.

However, the chief in Kabara wanted an exchange.

He wanted the kekeo from Oneata, which is a special kind of seashell only found in Oneata. 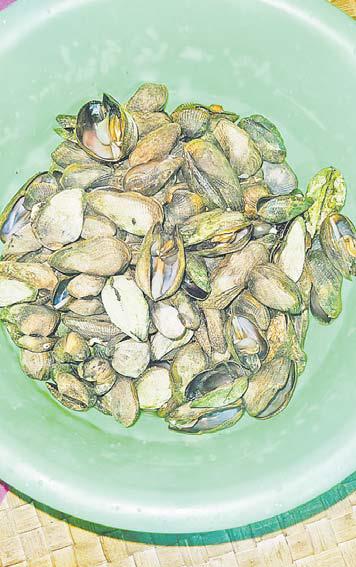 And because the mosquitoes at that time were used as panic machines or alarms to alert the chiefs about their enemies, the chief from Oneata did not hesitate to make the exchange.

Mr Dautu the chief from Oneata was excited and left in a hurry.

He was only halfway back to his home when he opened the parcel given to him.

To his surprise, the mosquitoes scattered in the air and flew over him.

The chief grew angry and threw a stone at the Kabara chief who was just crossing over Vuaqava Island.

The stone hit the parcel, tore right through it and everything fell right over Vulaga Island.

“The kekeo in the parcel and the freshwater fell over Vuaqava and that was how the lake was said to be formed,” Mr Dautu said.

“If you go to Oneata they have the empty shells of the kekeo but now kekeo is only found here in Vuaqava.”

Mr Dautu said elders who later found out about the lake went out at sea and brought turtles, wondering if they could survive in the lake.

A major worry for the villagers now is that the kekeo might become extinct because the turtles have outnumbered the kekeo in the lake.

“Unlike before, the villagers here would go to the island for two hours only and get back with 10 sacks of the kekeo, but now they can’t, it’s very difficult to locate them.”

With the kekeo on the lake, Mr Dautu said another prized possession was also found and significant to the lake alone. It is called koya. 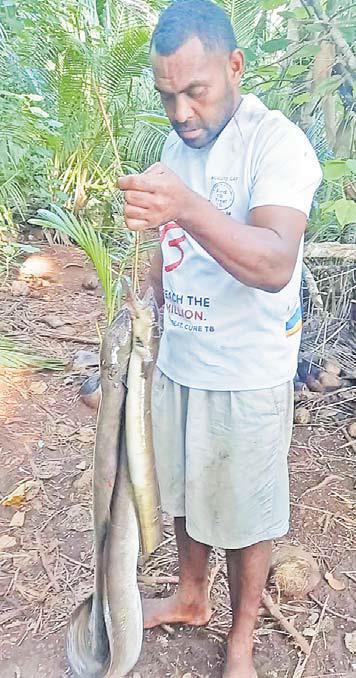 A man from Naikeleyaga holding the koya. Picture: LUKE NACEI

The koya according to Mr Dautu is like an eel and leaves by the edge of the lake.

“The koya is also used in preparing a feast during traditional ceremonies.

“Another significant thing about that lake is that when there is high tide out in the ocean, there will be low tide in the lake and vice versa.

“This is proven when you get to the home of the kekeo you will see that when it is low tide the water gets into the hovel and when it is high tide it comes out from it.

“Many don’t know about these things and the lake but when you visit the lake you will surely be amazed.”

Mr Dautu said to have these totems on the island and nowhere else was overwhelming.

However, the myth behind them and the need to pass on the legend of the lake to the younger generation will be something they need to work on.

And because the lake has now become a sightseeing area for tourists, Mr Dautu is worried the story passed down from generation to generation would vanish with time.

“We know that it is our job as elders of the village to have this knowledge passed down to our younger ones so that it lives on.”

Meanwhile, the beautiful Vuaqava with its central lake known for turtles, kekewa, koya and amazing birdlife could be the sacred island for the Fijian culture.

• History being the subject it is, a group’s version of events may not be the same as that held by another group. When publishing one account, it is not our intention to cause division or to disrespect other oral traditions. Those with a different version can contact us so we can publish your account of history too — Editor.