The opening of the Fiji Museum at Thurston Gardens in 1955. Picture: FIJI MUSEUM

The history of the Fiji Museum began in 1904 when the idea for the museum was first conceptualized by the British.

According Fiji Museum online records, the museum was established to ‘preserve examples of Fijian craftsmanship and material culture.

It began with a collection of Fijian materials donated by William Allardyce (1861- 1930) to the Suva Town Board.

Allardyce was a career British civil servant in the British Colonial Office who served as acting Governor of Fiji from 1901-1902.

These exhibitions were displayed on the walls of a room at the Suva Town Hall, which was previously called the Queen Victoria Hall. 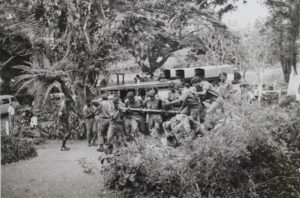 Soldiers help bring in drua, into the Fiji Museum in the 1950s. Picture: FIJI MUSEUM

Allardyce’s donation set the tone for the receipt of many more gifts which allowed the museum’s collections to develop further.

Wall served as curator and was a member of the committee of the Society.

He worked as honorary secretary and as treasurer in his lifetime.

One of the Fijian Society’s primary goals was to assist “in the formation and care of a museum.” They were also “. . . endeavouring to collect useful information about the past and early history of Fiji . . . fast passing into oblivion.”

Within the same year of Sir Everard’s arrival, a museum was established in Fiji and that he was its first patron.

A botanist, explorer, anthropologist and Colonial Governor, Sir Everard’s experience in museums was through the time he spent in British Guiana. 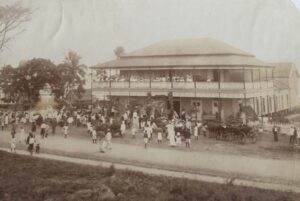 In 1910, the government approved an annual grant of £25, which allowed the trustees of the museum to appoint a parttime caretaker. In less than two years, the membership of the Fijian Society more than doubled. There were 60 members roll by December 31. In 1914, the Government and Fijian Society members combined funds and for £190 purchased curios owned by J.W. Philpott and a number of traditional Fijian canoes from a Mr Mahaffy. Throughout WWI, the Fijian Society carried on its work. In 1916, a catalogue was produced. The collections expanded and exhibits housed in the upper story of the Town Hall were in cramped conditions. Many of them had to be stored away in cupboards. According to the Fiji Museum, in 1919, the town hall caught fire which caused considerable damage to the collection, therefore some exhibits were wholly or partly destroyed. The museum was then moved to a concrete building in Draiba known as Veivueti House.

The year 1929 marked a turning point in the development of Fiji’s museum. 1 According to historian, R.A. Derrick, “it was largely owing to the interest of P. A. McElwaine, KC, the then Attorney General, that an ordinance was passed in 1929 constituting the Fiji Museum on a permanent basis.” The Fiji Museum was governed by the Fiji Museum Act and was first passed as Ordinance No. 22 on November 18, 1929. The following year, the entire upper floor of the Carnegie Library in Suva was made available to the museum at the annual rent of £100. The Fiji Museum remained there for the next twenty-four years, except at one stage when the Carnegie building was required for military purposes during WWII.

The Fijian Society’s successor, the Fiji Society, was formed in 1938 and operated continuously for over forty years. It was originally named The Fiji Society of Science and
Industry. The name was changed at the end of 1947 and got registered as an incorporated trust in 1962. During this era of the Fiji Society’s development George T. Barker became the museum’s curator. During 1930 to 1931, Barker and George Kingsley Roth, known as G.K. Roth, a Fiji colonial officer who was on secondment from the government, reorganised the museum. Roth’s had a keen interest in bure construction, fire walking and pottery. 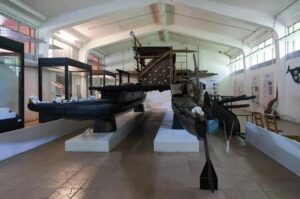 A drua on display inside the Fiji Museum today. Picture: EN.WIKIPEDIA.ORG

When WWII raged in the Pacific, fears within Fiji of a possible attack were a reality. Under Proclamation No. 1 dated 8 January 1942, the Governor called out the Fiji Defence Force for service. Later that same month, newspapers reported that there were eleven Japanese ships off New Guinea, more air raids were reported over that country and Japanese forces landed in the Solomon Islands. Due to the threat of air raids, some 1588 museum exhibits were packed in 86 cases and evacuated. Some exhibits were left behind in the Carnegie Library. The evacuated exhibits were first stored in a tunnel along Ratu Cakobau Road, below the residence of the British High Commissioner. When the tunnel was opened for inspection 12 months later, the exhibits were found to be mouldy and damp. Valuable books and other perishable material were damaged or destroyed.

In an attempt to salvage what could be saved, the exhibits were exhumed, aired, dried, repacked and transported all the way to Rakiraki in Ra. The idea back then was that Ra, being warm and dry, Ra would provide the suitable climate and weather to preserve the colony’s museum collection. Everything was stored in an inner room of the District Officer’s house at Vaileka. At this fourth location, they remained until March 1944, when the threat of air raids had passed. A Mr Wright remained the curator until June 1947, when he died. For six years, this position was unfilled and a caretaker maintained the museum. Without a dedicated curator, items received between 1947 and 1953 were not registered and recorded. 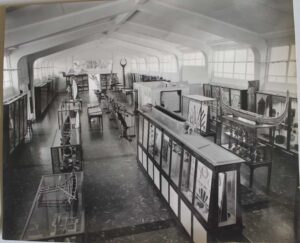 According to the Fiji Museum, in 1952, the Suva Town Board asked the trustees of the museum to vacate the Carnegie Library because the place was needed for municipal purposes. The trustees requested the Government to provide funding for the construction of a museum building in the Botanical Garden area.Funds were approved and the new building was constructed by Narain Construction Co. Ltd. and was completed in August 1954. The transfer and rearrangement of the collection took several months. In 1955, the new museum building was officially opened by His Excellency the Governor, Sir Ronald Garvey on the 20th of January. Today, the 6 departments of the Fiji Museum are: The Archaeology, History & Prehistory Dept., The Exhibition & Display Dept., The Conservation & Nature History Dept., The Collection Dept., The Education Dept., and The Accounts Dept. The Fiji Museum now has artefacts up to 3700 years old.

(This article was written based on information from Fiji Museum literature and the thesis Challenges to a House of Treasures: A cultural history of the Fiji Museum by Allison O.Ramsay)