Our love is here to stay

Mr and Mrs Gardiner enjoy time-out for a special photo session after their wedding. Picture: SUPPLIED

“IN our relationship, we don’t dwell on memories; yet build to finish our journey together. Each day is a new opportunity for God to write on us all over again.”

It was a two year journey of sailing through unchartered waters and the challenges of this world when the couple finally decided it was time to fully commit their relationship to God and live of fruitful abundance and blessings.

The groom, Lee Gardiner is from Adelaide Australia and is half Fijian, half Australian and was adopted into an English family at three weeks old. Meeting his wife was a blessing in disguise as it would allow him to trace back his Fijian roots.

He is the Account Manager for the Australasian Performing Right Association (APRA AMCOS) in South Australia.

The bride is from Vanu Levu and is a renowned artist, singer and composer and has been well known for her many awards and songs in Fiji and the Pacific region.

How they met was a divine miracle through music.

It was on Elena’s musical trip to Australia that she was introduced to her husband and from then on she was signed to his record label – iDigLig Digital Records.

“After we got to know each other, Elena introduced me to God through her (and now our church – Congress WBN ),” Mr Gardiner said.

“Following giving my life to Christ we undertook marriage counselling sessions with our regional coordinator Josiah Qalovaki which was a journey which ultimately lead to us exchanging vows on the Saturday, March 9.

A week ago, the couple sealed their relationship in an intimate yet simple and elegant wedding held at Suva’s Albert Park.

It was probably the most important day for Mr and Mrs Gardiner as the God gifted beautiful weather added on to the presence of close family members, relatives and friends who came from abroad and from around the country to be part of their special day.

The wedding was also an amazing day in which everyone who attended witnessed God’s faithfulness and determination for them to be united in marriage.

Foods, music, laughs and loads of entertainment added on to the colourful wedding ceremony that marked the beginning of their journey as husband and wife.

“My vows took precedence over the both of us. Our vows were captured from the book of Ruth in the Bible. Before I met Elena – I had not yet met God and through Elena God presented Himself to me,” Mr Gardiner said.

“It was based around coming into her family, her faith, and ‘Your God is my God, your community and family is now my community’.”

The couple always love to spend time with their nieces and nephews and they love to write music together but devote their time to God through congress.

The masi, tropical and simple theme added on to the basic touches of the couple’s lives.

Elena wore a beautiful white gown bought by her mother in law in Australia, and Lee wore a woolen suit by Peter Jackson in Australia.

The bridesmaids and the groomsmen wore dresses and bula shirts designed by Lewakepewa Creations.

Approximately 200 people gathered to witness the union of Lee and Elena Gardiner and they begin their journey in Adelaide together in which she will continue to represent Fiji in music and God with the utmost respect and love. 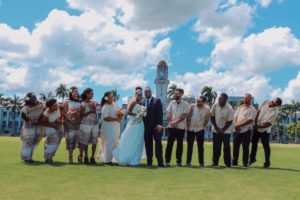 The newly-weds with their bridesmaids and groomsmen at a photoshoot at Suva’s
Albert Park. Picture: SUPPLIED 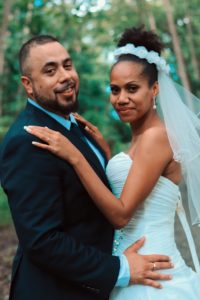 Together is a beautiful place to be.The best is yet to come. Picture: SUPPLIED 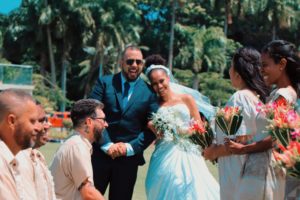 The smiles and the promise to be in each other’s hands forever. Picture: SUPPLIED