Las Vegas 7s: Tuivoka plays for US based Lomaiviti

ASAELI Tuivoka will not feature for Fiji this weekend but played for the USA based Lomaiviti today at the Las Vegas Invitational Sevens.

Tuivoka arrived on Tuesday and trained with the team.

However, coach Gareth Baber said he was still feeling weak as he had a bit of flu. 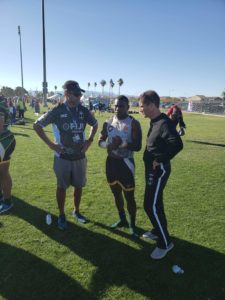 Isoa Tabu debuts tomorrow with brother Sevuloni Mocenacagi being named as the 13th man. He could be called in if there are injuries to the team or if a player cannot compete due to medical reasons.

“All players have prepared well and shown focus over our time here in Vegas so far and all are fit and ready to go,” Baber said.

“We had our captains run and stadium visit this morning and will use the rest of the day to create focus, then tomorrow it’s about delivery.”

Fiji’s team in the HSBC Las Vegas 7s this weekend are:

He made his debut in the HSBC World Sevens Series in Wellington in 2016. The 23 year old was a silver medalist at the 2018 Commonwealth Games. The forward who stands at 1.95m has appeared for Fiji in 90 matches, scored 139 points and 27 tries since his debut. Kunavula has also copped six yellow cards. This season, he has played 11 matches for Fiji, scored 15 points from three tries and also had a yellow card.

Leading by example, the captain was named in HSBC dream teams in Cape Town and in Hamilton in this season’s HSBC World Sevens Series. The 28 year old stands at 1.9m and featured for Fiji at the RWC 7s in 2018 and was also a silver medalist at the 2018 Commonwealth Games. Since his debut, Nasoko has scored 134 tries, 314 points and copped seven yellow cards. This season he has scored a total of 70 points, 14 tries from 24 matches.

A silver medalist at the 2018 Commonwealth Games, Vakurunabili made his debut for Fiji at the London 7s in 2017. Since then he has featured in 78 matches for Fiji, scored 150 points from 30 tries and also had three yellow cards. This season, he has played in 12 matches, had a yellow card and scored 15 points from three tries.

The 20 year old made his debut in the 2018/19 series as an injury replacement at the Dubai 7s. But he quickly stamped his mark and was named in the HSBC Dream Team in Hamilton.

He was part of the Fiji under 20 that won the World Rugby Trophy 2018 (15s). He has played 20 matches for Fiji and has scored 35 points from seven tries. Derenalagi has had three yellow cards.

His debut was at the Paris 7s in 2017. Has played 77 matches for Fiji scoring 75 points from 15 tries. Dranisinikula missed the start of the season due to injury. He made his  first appearance on the 2019 series in Hamilton after missing Dubai and Cape Town. The 29 year old has played nine matches for Fiji this season. Standing at 1.92m,

Will make his debut for Fiji this weekend.

The former skipper was named the HSBC player of the final and was also in the dream team of the Hamilton 7s in New Zealand. He was nominated for World Rugby Men’s Sevens Player of the Year in 2017 and 2018. The 29 year old made his debut in Gold Coast in 2014. A member of the 2016 Rio Olympics gold medal team, Tuwai also played at the RWC 7s last year and also won silver at the Commonwealth Games last year. The first choice half back has played a total of 234 matches for Fiji, scoring 529 points and 105 tries. In his 5th year of national representation, Tuwai has only copped one yellow card. This season he has played in 22 matches and scored 45 points from nine tries.

The DHL Impact Player in Hamilton this season made his debut in Dubai last year. The 20 year old was named the HSBC player of the final in Cape Town in only his second tournament. Botitu and Derenalgi were both members of the Fiji under 20 15s team that was the World Rugby under 20 trophy winner last year and he also featured for Fiji in the same tournament in 2017. He played for Fiji Warriors in the World Rugby Pacific Challenge in 2018. He has played 24 matches for Fiji since his debut in the series and scored 73 points from nine tries and 14 conversions. He copped a yellow card once this season.

Made his debut in Dubai in 2018. He was named in the HSBC dream team in Hamilton this year. He has played 21 matches for Fiji scoring 75 points from 15 tries.

One of the fastest man in the series, Naduva was named in the HSBC dream team for at the Cape Town 7s in 2018. A silver medalist at the 2018 Commonwealth Games, Naduva also played for Fiji at the Rugby World Cup 7s in the same year. He made his debut in Sydney in 2018. The 29 year old has played 65 matches for Fiji since his debut, scoring 226 points from 44 tries. Naduva has a yellow card to his name copped in the last season. He has played 24 matches this season, scoring 102 points from 20 tries and one conversion.

“We need to work as a team”