THE Hexagon Group of Hotels held its Employee of the Year 2018 Awards last week.

Two hosts were recognised for their outstanding contribution towards the tourism sector and were given awards by Hexagon Group chairman Hafiz Khan.

He joined the company in 2010 and worked at Grand Wests Villas, Nadi, in various departments such as Rooms Division, Front Office Reception and Administration.

In December, 2018, Romit was promoted by group chairman, Mr Khan to the position of duty manager at the group’s new resort — Yadua Bay Resort, Villas and Spa which is due to open soon at Malaqereqere, Sigatoka.

Mr Khan said Romit caught the attention of management through his loyalty, hard work and ambition to progress through the ranks within the Hexagon Group.

Makelesi Saukuru has been a multi-award recipient at the Hexagon Group.

The Housekeeping Department head has been with Grand Wests Villas for more than 15 years, after being transferred from the Melanesian Hotel in 2003.

She was employed in the housekeeping department until 2015 when she was given the opportunity to step up and take the position of the House Keeper HOD.

Mr Khan said Makelesi also assisted in the F&B Department when they have large catering functions and she is also responsible for the conference room when required.

Group chairman Mr Khan said Makelesi was a great example of a long serving loyal employee who let her work and results speak volumes of her work ethic. 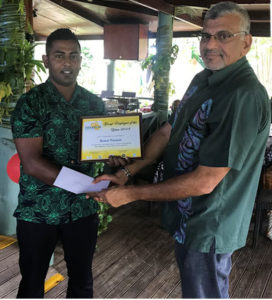 Australia assists in repatriation of Fijians from India

Teachers receive a lot of interest

Yauvoli to replace Mara in the US