Serve your next kokoda in glassware inside of bowls. Picture: SUPPLIED

For most Fijians, kokoda is a ‘raw’ fish dish served in coconut milk. At its most basic level they would be right, however, to me kokoda is so much more.

Just like South American ceviche or Japanese sashimi, many types of seafoods and meats can be incorporated into a modern kokoda dish, not just fish. Peruvian ceviche includes fish, octopus, squid, clams and even bull’s testicles.

In Japan, raw sashimi can refer to almost any kind of meat including fish, shellfish, crustaceans, raw beef, chicken and even horse!

So, when it comes to the Fijian kokoda, while fish is the most common preparation, there is no reason why it can’t also include other meats and even raw vegetables. How is this possible?

At its heart are three major components — the curing of the main ingredient, a raw salsa and coconut milk.

The first major component is a cured protein that is ‘cooked’ in citrus or acid.

The second contrasting element to offset the rawness of the main protein is a pungent salsa that includes raw onions balanced with acidic tomatoes or even the sourness of some fruits.

And finally, the part that truly defines a kokoda, is the creamy coconut milk — fresh not tinned.

Once you understand that every kokoda must include these trio of ingredients, you can begin experimenting and innovating each element to create something new. 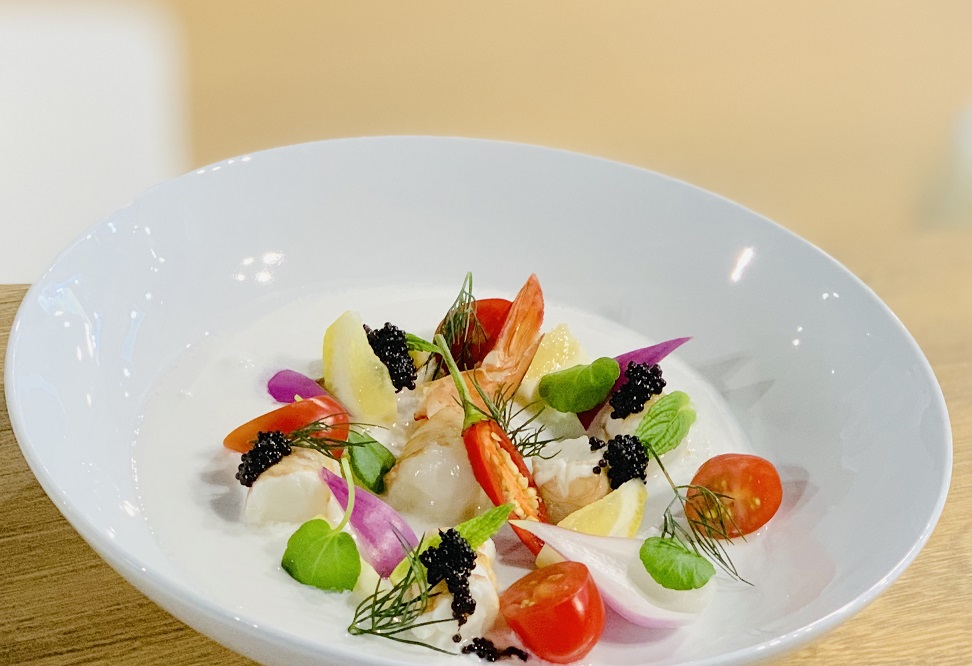 Preservation techniques like smoking, sun-drying, fermenting and curing date back to ancient times when our ancestors had no fridges, and were forced to look for ways to store and keep raw foods for later use. As early as 3000 BCE in Mesopotamia, cooked meats and fish were preserved in sesame oil and dried salted meat and fish were part of the Sumerian diet. Salt from the Dead Sea was in use by Jewish inhabitants around 1600 BCE, and by 1200 BCE, the Phoenicians were trading salted fish in the Eastern Mediterranean region. By 900 BCE, ancient Greek cooks were dry salt curing and smoking meats, and by 200 BCE, the Romans acquired curing procedures from the Greeks and further developed methods to pickle various kinds of meats in acidic brine.
Preservation techniques can be found in nearly every culture and whilst many used salt, the ancient Peruvians and iTaukei learned to preserve and cook their seafood with citrus fruits like limes and lemons. This curing is a chemical process that effectively rearranges the ingredient’s protein structure in what is called denaturation.
Although seafood ‘cooks’ fully when left in citrus for a few hours, denser proteins like beef, chicken and duck require further cooking after this initial curing. Eating raw and rare beef or duck is generally considered safe to eat, however uncooked chicken is not. Vegetables like eggplant can also be steeped in a citrus liquid with spices to mimic the kokoda technique, essentially pickling the raw produce in a similar way.
Today many people substitute vinegar as a faster and cheaper way to cure their fish or meat, but honestly that is like comparing fresh coconut milk to tinned coconut milk — it’s just not the same.
Fish cured in cheap white vinegar has an artificial sourness (because the vinegar itself is artificial!) and leaves an unpleasant taste on the palate. Stick to lemons, limes, cumquats and mandarins. If you want to get boozy, you can add white alcohol including gin or vodka to the curing liquid. 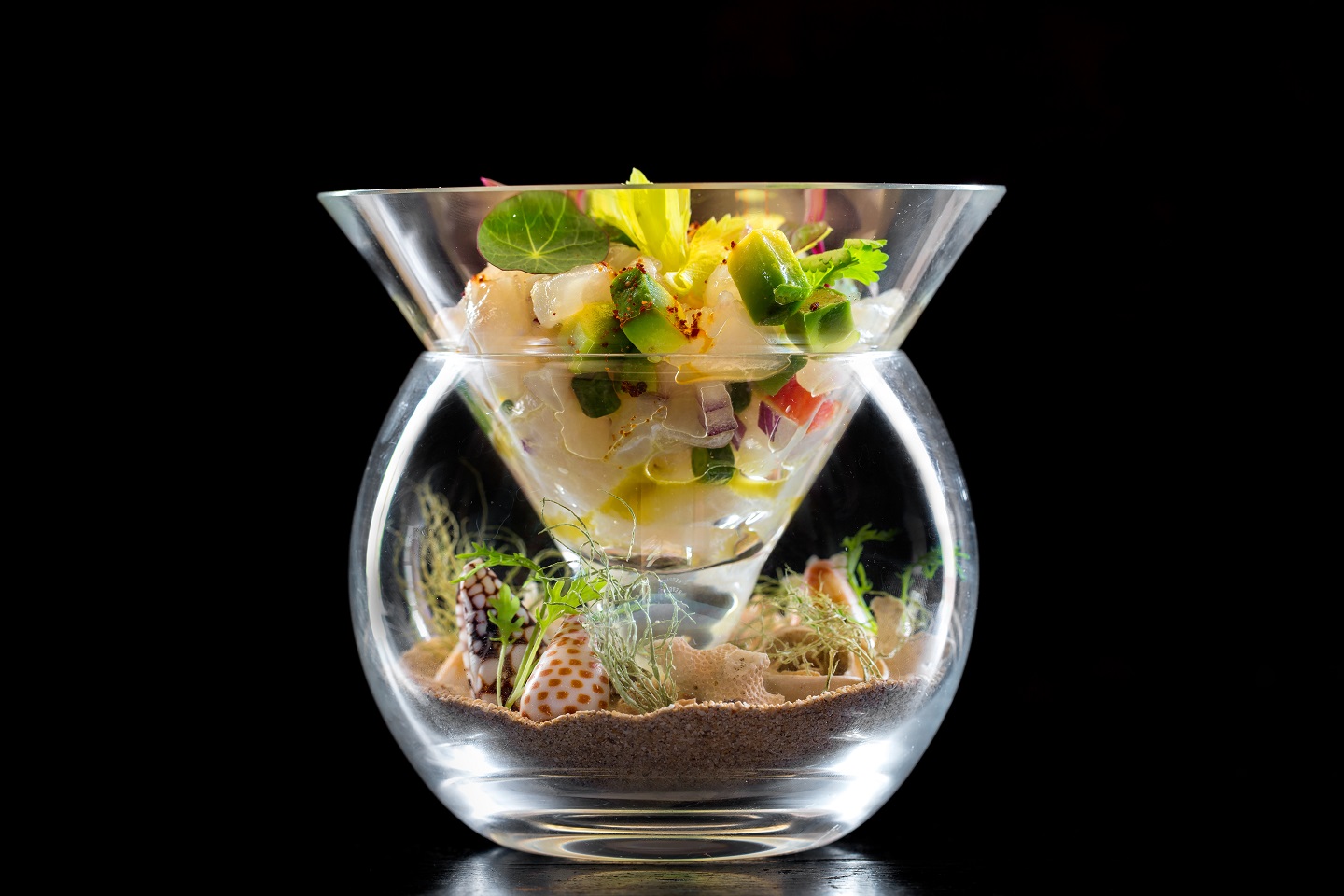 Renowned American chef Julia Childs once said that ‘it is hard to imagine civilisation without onions’. Raw onions are peppery, sulfury and very pungent. Their sharpness and crunchy texture are perfect in ceviche, sashimi and kokoda dishes to help offset the rawness of fish or richness of bloody red meats. Red onions are my preference in kokoda as their gorgeous burgundy skin and flesh is full of bright, colourful peppery spice that pairs well with nearly all cured seafoods and meats. Green spring onions are my next favorite including both the white and green parts for colour. Tomatoes are another vital element in any salsa and provide that sweet and acidic contrast to the pungent onion. In many of my fusion kokoda, I also use tart fruits like passionfruit, pineapple and mango. Not only do they provide sweetness and sourness, the tropical fruits also elevate the salsa to a whole new level of contrasting flavour and crunchiness.

Lolo — the most important ingredient 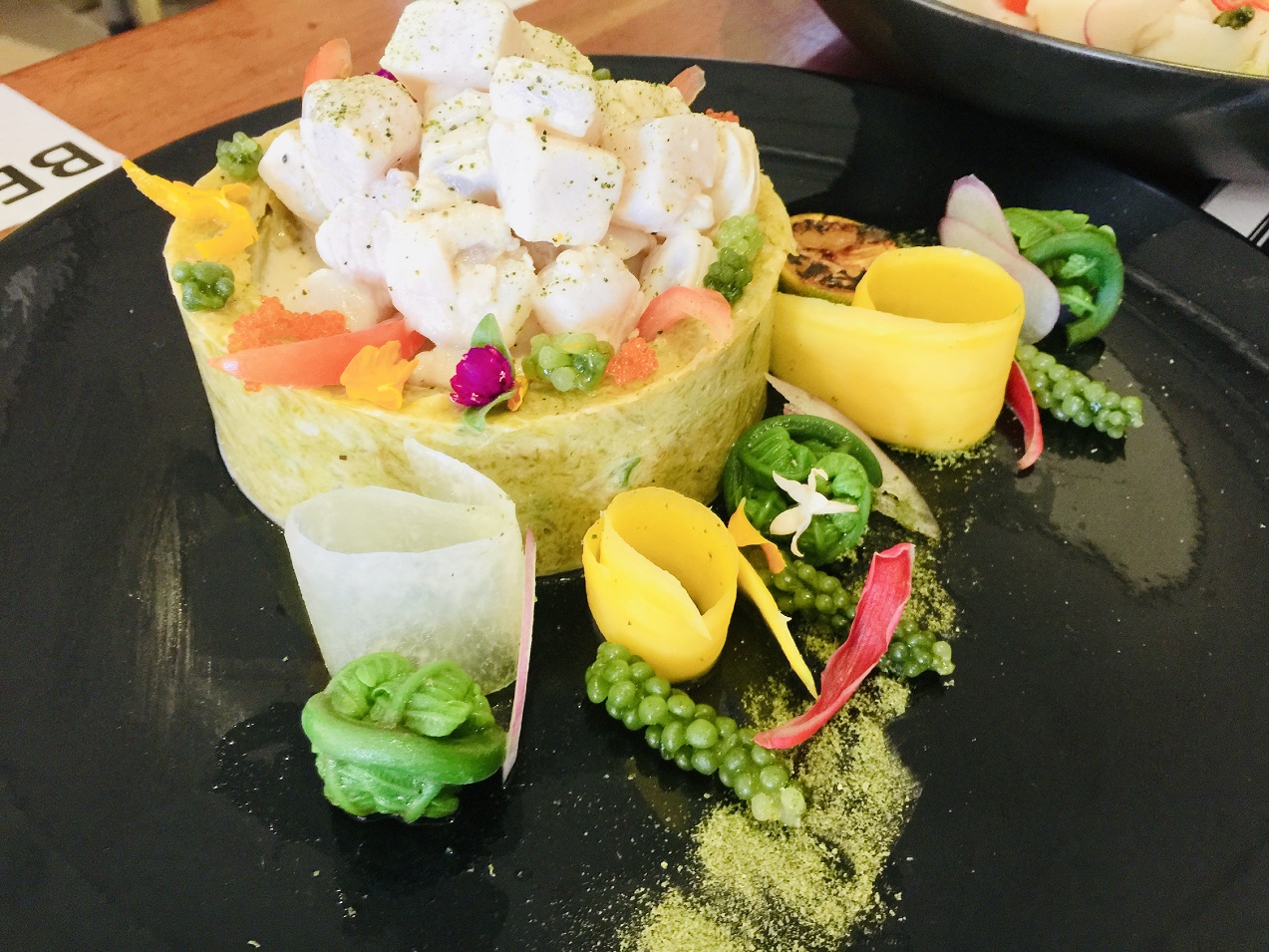 When I’m abroad demonstrating kokoda at trade shows, the most common answer to ‘what is kokoda?’ is that is ceviche with coconut milk. No matter what variation you enjoy of kokoda throughout the South Pacific, it is nearly always with freshly squeezed lolo.
From the Samoan oka i’a to the Tahitian poisson cru, we eat fish with coconut milk in the Pacific Islands. Freshly squeezed, thick and creamy is the best for kokoda. The local canned stuff is acceptable but has a subtle tin taste that lolo connoisseurs will immediately detect. I’ve found the best way to squeeze the perfect coconut milk for kokoda is to add a small amount of hot water to your fresh coconut scrapings before you squeeze.
Let the hot water absorb into the coconut as it helps to release the oils and flavour. I almost never add water once I have squeezed out all the moisture, but I have experimented with infusing the milk with other ingredients to give it more flavour. Smoking or scorching the scraped coconut is one of my favorite ways to give the lolo an earthy taste, but I have also added lemongrass, teas, spices, lobster bisque, sea urchin, tropical fruits and even alcohol to my kokoda coconut milk.

Kokoda to the modern chef is more than just a fish dish, it is recipe borne out of preservation techniques and has evolved in contemporary restaurants like ceviche, poke and sashimi, except here in the islands we add a creamy component that just so happens to be growing everywhere — coconut.