Discovering Fiji: The cave of bones

The area surrounding the cave looked as if death itself had made a home behind the grove of breadfruit trees that guarded the cave. Picture: LUKE RAWALAI

WHEN Tropical Cyclone Yasa ripped through the island of Galoa in the province of Bua, Vanua Levu, in December last year it destroyed the 36-year-old Methodist Church which has withstood stronger cyclones such as Severe TC Winston in 2016.

While many lament the desolate remains of their church which has been a symbol of hope for the 200 villagers on the island off the coast of the Lekutu District, people have forgotten a piece of history that lays buried in the foundations of the church.

But not for 69-year-old Mosese Ramototabua who is a member of the Ra clan in Galoa Village.

Mr Ramototabua was involved in the construction of the church which stands on the graves of villagers that died during the great measles of 1900s which was labelled as one of Fiji’s darkest moments in history.

He said elders had identified the burial ground of the measles victims in the 1970s as the perfect site for the newly proposed village church.

Before the actual construction works began in 1976, Mr Ramototabua said elders on the island had to prepare a ceremonial yaqona for the removal of the graves as a peace offering for the departed.

“I still remember the day when five other youths including me were instructed to start the exhumation of the graves and bodies following the yaqona ceremony,” he said.

“We were ordered to start work in the graveyard at 5pm on a Friday afternoon and our work was not an easy one considering that disturbing the dead back in those days was considered a grave mistake.

“Women and village elders stared in terror as we began this daunting task expecting the dead to drag with us in the ground at any time.

“Luckily nothing happened and graves at the site were exhumed successfully before groundwork for the new church began.”

Mr Ramototabua said he was told by his grandfather of the pandemic which claimed the lives of villagers who were later buried at the site.

“My grandfather told me that the disease was like a curse that seemed to offer no other option, but death for its victims.

“Those who were buried at the site were buried in a mass grave and the death toll was recorded over the 100s.

“However, the completion of the church in 1985 seemed to return hope and light into a piece of our land that bore a dark piece of history for our people.”

Standing in the ruins of the church a week after the cyclone hit his island home, Mr Ramototabua said the absence of the church took with it a spiritual relic that his people took pride in.

Interestingly the great measles that took over Fiji between the late 1800s and early 1900s is recorded in oral tales in most places across Vanua Levu.

The cave of bones Located 40 kilometres from Labasa Town up in the Delaikoro mountain range lays the village of Vatuwa. 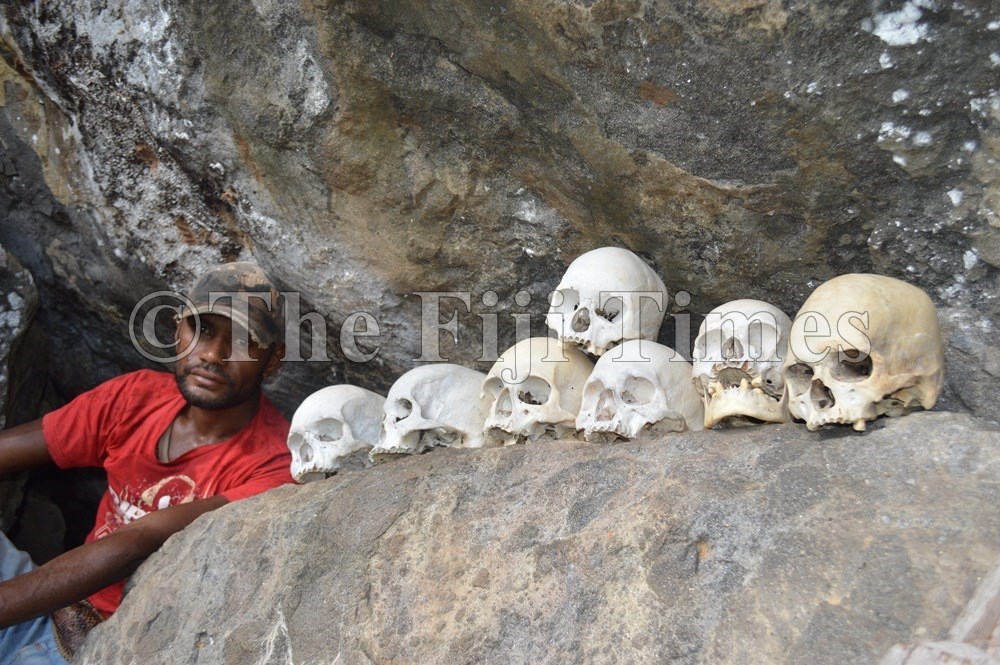 People of Naisabuli who were struck by the disease could not be given a decent burial as they were so many,so they were carried up and kept in the caves. Picture: LUKE RAWALAI

Seated on a hilltop, surrounded by ancient ditches above this village lays an old war fort known as Nasaubuli.

The caves were located on top a fort which is surrounded by ditches.

A friend who had visited the place described it as an isolated tomb with a window to a terrifying moment in Fiji’s medical history.

Looking at the human bones, scattered and piled inside a small cave, I couldn’t have agreed more.

The bones were clearly those of men, women and children, killed by the measles epidemic in the first decade of the 1900s.

They were the ancestors of the villagers of Vatuwa and Viriqilai.

The area surrounding the cave looked as if death itself had made a home behind the grove of breadfruit trees that guarded the cave.

Peering into a small opening at the base of the cliff I saw human skulls and bones.

Vatuwa villager Paulo Navidi said the measles period or Misila Levu as the iTaukei termed it, was a period of sorrow and wailing for his people.

“People of Naisabuli who were struck by the disease could not be given a decent burial as they were so many, so they were carried up and kept in the caves,” he said.

“Our people perished in numbers as the wave of measles hit the village.”

According to an article in the New York Times on July 12, 1875, measles was brought to Fiji by Ratu Seru Cakobau and his entourage who had contracted a mild form of the illness while visiting Sydney where a measles epidemic was raging.

The report is quoted: “The result of the visit of his ex-Majesty King Cakobau to New South Wales forms an awful era in the history of Fiji,” the article is quoted as reporting.

In the native mind, it had dimmed the lustre which surrounded annexation and had filled the people and chiefs with consternation and dismay. Suddenly, within a week afterwards, the air resounds with wails and lamentations.

All at once, and in every direction, the people are stricken down with a disease, which, up to this time they had never in the slightest degree acquainted with.

Measles spread with “frightful rapidity” through Fiji and by year’s end, at least 20,000 people had died.

Among those who died, sad to relate, are the principal chiefs, a majority of those that signed the deed of cession,” the article stated.