New Zealand Police rescue a man from the mosque where the shooting took place in Christchurch. Picture: RNZ

Mr Bush said the loss of life and the number of those who were injured was tragic, and they were continuing to deal with this unprecedented event for New Zealand.

“This has been an abhorrent event and my thoughts are with all of those affected in Christchurch,” the NZ police commissioner said at the press conference earlier tonight.

“Be assured NZ Police stand with you all tonight.”

He confirmed that 49 people were killed in the attacks – 41 people at the Deans Avenue mosque, seven at the Linwood Avenue mosque, and one died in hospital. 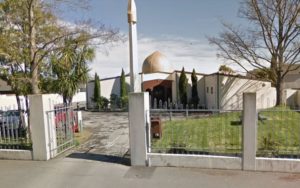 The number of those being treated in hospital has been updated to 48 people.

A 28-year-old man had been charged with murder and is due to appear in the Christchurch District Court tomorrow morning.

“We are unable at this stage to provide details about matters leading up to the attacks.

“It is very early days and these matters will form part of the investigation.”

Increased Police presence across Christchurch and surrounding areas have been assured.

“Our priority is to keep all New Zealanders safe.

“There are community events planned across the country this weekend and there will be a visible Police presence at these events for safety and reassurance.

“We thank the public for their ongoing co-operation and we would like to reassure members of the public that a large Police presence will remain in the city for the time being.

“The safety of the community is our priority.”

Police have also notified members of the public of the Restoring Family Links (RFL) website where people can register missing persons or register themselves as alive.

Police say information will continue to be provided as it becomes available.