Patients and family evacuated from the maternity ward after the fire broke at the CWM Hospital yesterday. Picture: RAMA

A FIRE at the boiler room of the Colonial War Memorial Hospital in Suva left patients in a state of chaos and confusion, raising the question of the effectiveness of its evacuation plan in such events.

Patients in the Children’s Ward, Maternity Unit and nearby wards were evacuated twice and eventually to temporary makeshift wards within the hospital including the Ante Natal Clinic.

As firefighters tried to contain the fire, patients lay outside the perimeters of the hospital, some with intravenous drips, some in wheelchairs and mattresses.

Police officers assisted the doctors, nurses and ward assistants as they evacuated patients and prepared the temporary wards.

“As with any unpredictable emergency event, it is what we expect that there will be a certain level of chaos initially,” head of obstetrics and gynaecology unit at the CWM hospital Dr James Fong said.

By 6pm, about two hours after the fire started, the hospital had moved most patients to new wards.

The National Fire Authority will begin their investigations today.

NFA chief fire officer Qionilau Moceitai said they would only then be able to ascertain the cause of the fire.

He confirmed that the Suva Fire Station received a call at 4.07pm and were at the scene by 4.13pm. 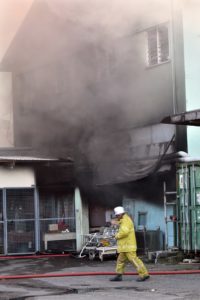 A fireman at the scene of fire at the CWM Hospital yesterday. Picture: RAMA

However, by then, he said the boiler room had already been fully engulfed with flame, but they were able to contain the fire and stop it from spreading to the laundry area.

“We were also able to extinguish the fire at the bottom level where the boiler is. It didn’t go up to the laundry room so we were very lucky,” Mr Moceitai said.

“At the moment, we have cordoned the area until we do our investigations tomorrow morning. Today (yesterday), we are just concentrating on trying to extinguish the fire, we haven’t checked whatever is in that area. There might be a gas tank inside, but we don’t know yet.”

Twenty firefighters and three fire trucks from the Suva and Valelevu fire stations were part of yesterday’s operation.

Meanwhile, the Fiji Police Force confirmed about 100 police officers were deployed to the hospital to assist with the evacuation of patients.

(This article was also contributed by Aqela Susu)

Loanee prop was a Warriors fan long before joining the Roosters

Jordie pumped for ‘Battle of Barretts’ with Beauden